It’s almost that time of year again! If you’re not ready, file for an extension 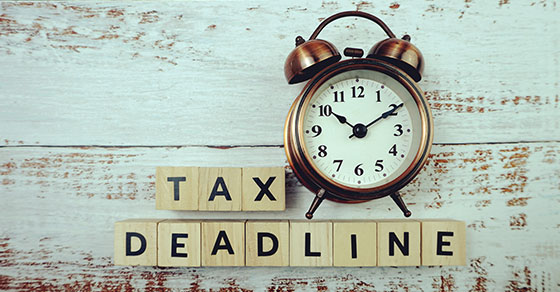 The clock is ticking down to the April 18 tax filing deadline. Sometimes, it’s not possible to gather your tax information and file by the due date. If you need more time, you should file for an extension on Form 4868.

An extension will give you until October 17 to file and allows you to avoid incurring “failure-to-file” penalties. However, it only provides extra time to file, not to pay. Whatever tax you estimate is owed must still be sent by April 18, or you’ll incur penalties — and as you’ll see below, they can be steep.

Failure to file vs. failure to pay

Separate penalties apply for failing to pay and failing to file. The failure-to-pay penalty runs at 0.5% for each month (or part of a month) the payment is late. For example, if payment is due April 18 and is made May 25, the penalty is 1% (0.5% times 2 months or partial months). The maximum penalty is 25%.

The failure-to-file penalty runs at the more severe rate of 5% per month (or partial month) of lateness to a maximum 25%. If you file for an extension on Form 4868, you’re not filing late unless you miss the extended due date. However, as mentioned earlier, a filing extension doesn’t apply to your responsibility for payment.

The failure-to-file penalty is also more severe because it’s based on the amount required to be shown on the return, and not just the amount shown as due. (Credit is given for amounts paid via withholding or estimated payments. If no amount is owed, there’s no penalty for late filing.) For example, if a return is filed three months late showing $5,000 owed (after payment credits), the combined penalties would be 15%, which equals $750. If the actual liability is later determined to be an additional $1,000, the failure-to-file penalty (4.5% × 3 = 13.5%) would also apply to this amount for an additional $135 in penalties.

A minimum failure-to-file penalty also applies if a return is filed more than 60 days late. This minimum penalty is the lesser of $435 (for returns due through 2022) or the amount of tax required to be shown on the return.

Both penalties may be excused by the IRS if lateness is due to “reasonable cause” such as death or serious illness in the immediate family.

Interest is assessed at a fluctuating rate announced by the government apart from and in addition to the above penalties. Furthermore, in particularly abusive situations involving a fraudulent failure to file, the late filing penalty can jump to 15% per month, with a 75% maximum.

Contact us if you have questions about IRS penalties or about filing Form 4868.